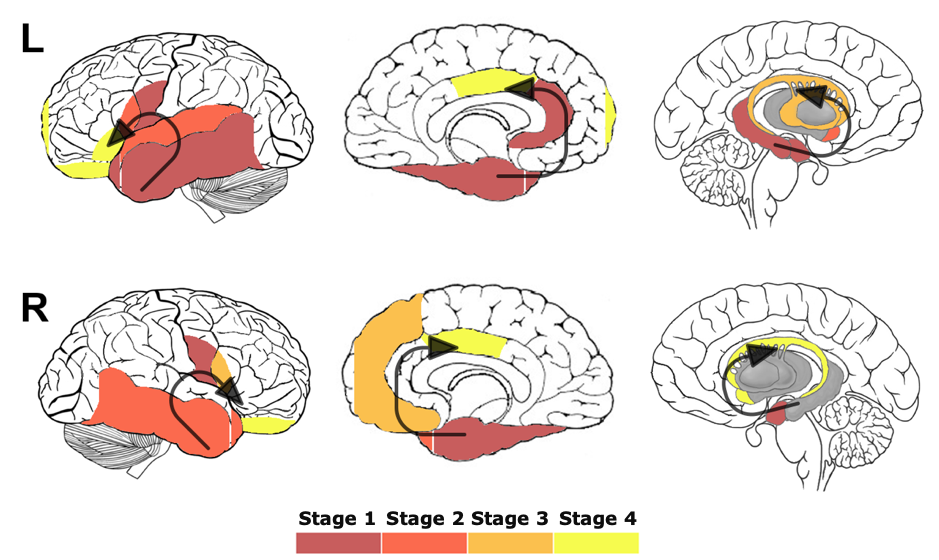 Our latest research published in Alzheimer’s Research & Therapy was led by Martina Bocchetta in collaboration with Mar Iglesias Espinosa, a neurologist who visited our team from Spain.

Identifying what stage of disease someone is in within their lifetime is sometimes challenging, and it is even more so when a condition is rare. Issues include the difficulties of making a diagnosis at the very early stages of the disease, and only being able to make a final confirmation of the underlying pathology by examining brain tissue after the person’s death. Such a post-mortem examination is important, but it can often only give information about the later stages of the disease.

This is particularly the case for people with a clinical diagnosis of the semantic variant of primary progressive aphasia (svPPA) during life, who usually have post-mortem confirmation of a very specific pathology in their brains, called TDP-43 type C.

In this paper we investigated a way to define the evolution of disease progression during life, by looking at brain changes in a cohort of people who subsequently received a post-mortem diagnosis of FTD due to TDP-43 type C pathology.

We included 19 people with svPPA and 81 cognitively normal controls with available magnetic resonance (MR) brain scans. Using advanced neuroimaging methods, we were able to measure the volumes of nineteen cortical regions and seven subcortical structures from their MR scans, as shown in the figure below.

For each patient we worked out a score for each of the regions, in order to measure how abnormal their volumes were when compared with the brain regions of the controls.

We then used these scores to define a set of progressive stages of brain atrophy within the cohort of people with svPPA. We identified four progressive stages: Stage 1 was characterized by abnormal volumes for all patients in the left temporal cortex, temporal pole and amygdala and in the right medial temporal cortex. As disease progressed, atrophy spread to more posterior parts of the left temporal lobe (Stage 2), more superior regions (Stage 3), and in the right temporal lobe to more lateral regions (Stage 4).

We also wanted to make sure that our staging model worked well on a different set of data. We therefore tested it on 31 follow-up scans from 14 of the 19 people in the same cohort. This analysis confirmed the staging system, with all people with svPPA either staying in the same stage or progressing to a later stage at follow-up.

With this study we were able to define during life distinct stages of brain changes in TDP-43 type C pathology as the disease progressed. Using this imaging-derived staging system will hopefully allow us to better define where people with svPPA are in their disease progression, creating better understanding for both clinicians and family members.