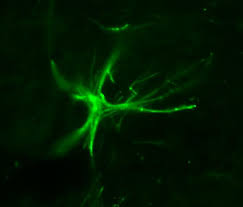 A new paper from our group, led by Carolin Heller in the Biomarkers Lab as part of her PhD, has now been published in the Journal of Neurology, Neurosurgery and Psychiatry. It looks at two blood markers called Glial Fibrillary Acidic Protein, or GFAP, and Neurofilament Light Chain, or NfL, in one of the variants of primary progressive aphasia.

Semantic variant primary progressive aphasia, also known as semantic dementia, is one of the forms of frontotemporal dementia where people develop problems with their ability to understand ideas and concepts. It is a sporadic disease usually. In other words, it is not usually caused by a genetic problem. However, we do not yet understand what causes it.

In semantic dementia, people lose brain cells in a specific part of the brain called the temporal lobe, usually more on the left side than the right.

We also measured a blood marker called NfL which increases when brain cells are being lost.

We tested these two markers using a very sensitive machine called a Simoa which can detects very low levels of proteins in the blood. We used blood collected from one of our studies at UCL called LIFTD, or the Longitudinal Investigation of FTD. In total, 28 people with semantic dementia and 36 healthy controls were tested.

We found that the levels of both GFAP and NfL were raised in semantic dementia compared with controls.

Furthermore, both levels became higher as the volume of the temporal lobe decreased, suggesting that these blood markers can show how severe the disease is.

We hope that these blood markers will become more widely used in the future. In the clinic it may help show what stage people are at in the disease. Whilst in future clinical trials, a decrease in the markers might help to show that a drug was working.